Democrats say Pence has failed the state when it comes to education, roads and civil rights for the LGBT community and the only way to change course was to elect John Gregg as Governor.

You can hear State Chairman John Zody, as well as House Democratic Leader Scott Pelath and State Senator Greg Taylor in the Leon-Tailored Audio above.  It runs about 18 minutes.

Republicans disputed the Democrats claims, saying when Gregg was Speaker the state was awash in debt and red ink and he used his influence to help his friends and family. 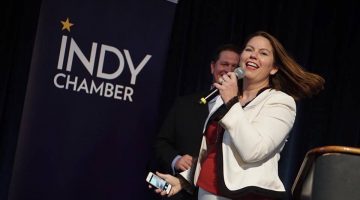