Braun Getting It from Both Sides

You wouldn’t think that Todd Rokita and Joe Donnelly would have much of anything in common apart from being from Indiana, but it turns out they do; businessman Mike Braun.

Both Rokita and the Democrats have accused Braun of lying in his last campaign TV ad (his 5th) where he talks about manufacturing and American jobs.

The Donnelly campaign says Braun lied about his connection to his brother’s company.  In a news release, the campaign said, “The ad falsely claims that Stewart Superior, a printing company at the center of an AP story last July, was “Senator Donnelly’s business.” Stewart Superior Corporation was, and continues to be, owned by his brother. Joe has never been a majority shareholder of Stewart Superior and has never been listed as the company’s owner.  Joe hasn’t had an active role in his brother’s company in over 20 years. Last year he sold his stock in it and donated the proceeds to 10 food banks across Indiana.”

Meanwhile, the Rokita campaign put out a news release calling the ad “shameless and ripe with hypocrisy.”  They said, “Braun’s new ad attacks others for encouraging out-sourcing, but the problem is that Millionaire tax-hiker Mike Braun has made a living off of selling products outsourced to China and Mexico. As the Associated Press pointed out just last week, Mike Braun has made his fortune selling products made in Mexico, China, Canada, and Germany, amongst other foreign suppliers”

Indy Politics reached out to the Braun camp for their reaction.

“Career politicians Joe Donnelly, Todd Rokita and Luke Messer cannot run from their records of voting to send American jobs overseas. Todd Rokita and Luke Messer voted to give President Obama fast-track authority for the Trans-Pacific Partnership”, said spokesman Josh Kelley. “Senator Donnelly is a career politician and his family business profited from sending jobs to Mexico. Mike Braun built an American company and has created thousands of jobs here in America. Like President Trump, Mike will take on the system that has sent jobs out of our country and bring them back.”

Political experts say the fact that Braun is being attacked from both sides means he is gaining traction with voters, which is likely the result of Braun being up on television for so long and having the airwaves to himself.

You can view the actual ad here. 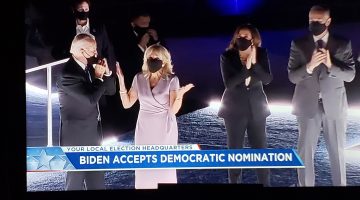