U.S. Senator Joe Donnelly is defending his recent vote to defend Planned Parenthood, despite the outcry from some of his fellow Democrats.

Donnelly has come under fire from some of his fellow Indiana Democrats for voting to defund Planned Parenthood in the wake of several controversial video recordings which have aired purporting that the organization sells organs harvested after abortions.

Donnelly says his vote was to delay funding until all the facts were in and it was somewhat similar to a vote he cast back in 2011.

You can hear his comments in the Leon-Tailored Audio above.  They run about six minutes.

Donnelly made his comments today during a tour of  the Stanley Black & Decker in Greenfield manufacturing plant in Greenfield. 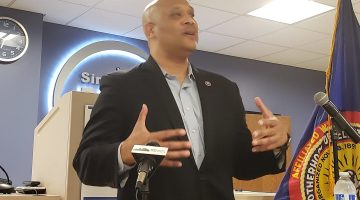