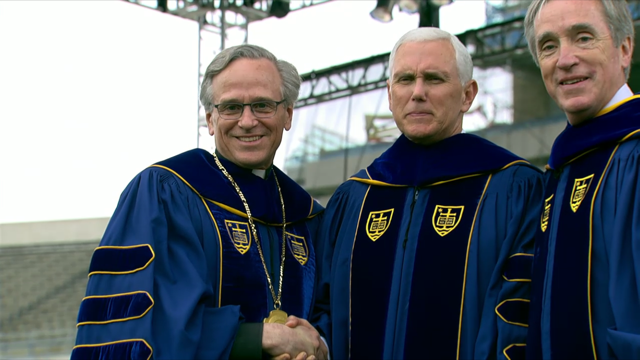 The following is a copy of the text Vice-President and former Indiana Governor Mike Pence delivered today at Notre Dame’s commencement ceremony.

About 100 students did walk out of the ceremony.

Father Jenkins, the board of trustees, distinguished members of the faculty, my fellow honorees, guests, grandparents, parents, family, and friends gathered here, all who have come from near and far to share a special moment and congratulations to a generation of promise — the University of Notre Dame Class of 2017! We are proud of you all. (Applause.)

For this son of Indiana, it is great to be back home again. (Applause.) But I have to tell you it’s deeply humbling for me to participate in the 172nd commencement here at University of Notre Dame in her 175th year.

My first-generation Irish-American mother is actually with us today, 83 years young, Nancy Pence Fritsch. (Applause.) And I’m pretty sure my mother thought she’d see me at a graduation at Notre Dame. (Laughter.) Hi, Mom.

The Notre Dame Class of 2017 is a class of extraordinary accomplishment. You came from every corner of America and from all across the world — representing all 50 states, the District of Columbia and Puerto Rico, and a stunning 74 foreign nations.

Some 3,143 men and women will graduate today with 3,171 degrees. Now by my count, that difference means that we have about 28 graduates earning multiple degrees from Notre Dame today. (Applause.)

We have with us a two-time Olympian, two Rhodes Scholars, two Truman Scholars, 15 Fulbright Fellows, a quadruple Domer, national champions in fencing and soccer, the Indiana Campus Compact Wood Award winner — and most impressive of all, I say with gratitude, that 38 of you will leave here and serve as officers in the United States Army, Navy, Marine Corps, and Air Force. And we thank you for your service. (Applause.)

Now, today is a day of celebration and the sun is out. (Laughter.) It’s also a day of appreciation — especially for all those who believed in you and saw you through — your friends, these great professors, and your wonderful families.

On behalf of all the moms and dads here, I can attest firsthand that this ceremony is one of the proudest moments of their lives. (Applause.)

I’ve been a governor, and now I’m Vice President of the United States, but the most important job I will ever hold is that of husband and father. (Applause.) In fact, my wife of 31 years, the Second Lady of the United States of America, is also with us today. Would you join me in welcoming Karen Pence? (Applause.)

Karen and I are the proud parents of three amazing kids — one of them who just joined the ranks of college graduates this last month. So we know firsthand that while today is an accomplishment for all of you who are graduating, it really is just as much an accomplishment for your families. You know you have come to this point because your parents and your families gave you a foundation of love and education. They encouraged you, they prayed for you, and in most cases, they signed a whole lot of checks to make this day possible. (Laughter.)

So before we go one step further, Class of 2017, why don’t you just stand up, turn around, catch the eye of the loved ones who are with us today, and show them just how thankful you are for all the love and support that carried you to this day? (Applause.)

Because of your hard work, and their support, you’re graduating from an exceptional university today. My charge to all of you is simply this: Be exceptional from this day forth.

One-hundred and seventy-five years ago, the Reverend Edward Sorin and seven of his companions left their home in Vincennes, Indiana. They traveled north along the Wabash, through fields and forests, amid the valleys and over the hills until they reached the very ground on which we stand today.

Here, they broke bread. They said their prayers. And in the words of Father Sorin, they established an institution with the noble mission to in their words “become a powerful means for good.”

And so it has.

For 175 years, the men and women who have come before you in this place, graduated from this university have gone forth to do good. The University of Notre Dame is special. (Applause.)

From the arts to engineering, from politics to prose, you have been given a strong foundation of critical thought and knowledge. You have studied the textbooks of your discipline and learned the facts and figures that you’ll need to succeed in your chosen field and profession.

This university stands without apology for human freedom and the inherent dignity of every human person, and it holds fast to the faith that gave it birth.

And the impact of Notre Dame reaches far beyond the sight of the Golden Dome. Your educational initiatives bring knowledge to the children across this country and the world who need it most. Your commitment to social concerns melds faith and action to overcome poverty worldwide. Your focus on ethics and culture promotes the value of all human life.

And know that in so many causes, I can assure you, that in these matters you have an ally in our still-new administration. You know, the greatest honor of my life is to serve as Vice President to the 45th President of the United States of America — President Donald Trump. (Applause.)

Just as Notre Dame has stood strong to protect its religious liberty, I’m proud that this President just took steps to ensure that this university and the Little Sisters of the Poor could not be forced to violate their consciences to fully participate in American civic life. (Applause.)

And just as Notre Dame has stood for those who are persecuted for their faith around the world, just a short while ago in Saudi Arabia, this President spoke out against religious persecution of all people, of all faiths. And on the world stage, he condemned, in his words, “the murder of innocent Muslims, the oppression of women, the persecution of Jews, and the slaughter of Christians.” (Applause.)

And where this President has stood for the unalienable right to life at home and abroad, I’m so proud that the University of Notre Dame has stood without apology for the sanctity of human life. (Applause.)

Your education at the University of Notre Dame has been exceptional — but, as the Good Book says, to whom much is given, much will be required.

So I urge you, as the rising generation — carry the ideals and the values that you’ve learned at Notre Dame into your lives and your careers.

Be leaders in your families, in your communities, and in every field of endeavor for the values you learned here at Notre Dame. And in these divided times, I urge you to take one more aspect of the culture of this historic institution into the mainstream of American life.

If the emanations of free speech were charted on a map like infrared heat signatures, one would hope that universities would be the hottest places — red and purple with dispute; not dark blue and white — frozen into cant, orthodoxy, and intellectual stasis.

If such a map were to exist, Notre Dame would burn bright with the glow of vibrant discussion. This university is a vanguard of freedom of expression and the free exchange of ideas at a time, sadly, when free speech and civility are waning on campuses across America.

Notre Dame is a campus where deliberation is welcomed — where opposing views are debated and where every speaker, no matter how unpopular or unfashionable, is afforded the right to air their views in the open for all to hear. (Applause.)

But Notre Dame is an exception — an island in a sea of conformity, so far spared from the noxious wave that seems to be rushing over much of academia. While this institution has maintained an atmosphere of civility and open debate, far too many campuses across America have become characterized by speech codes, safe zones, tone policing, administration-sanctioned political correctness — all of which amounts to nothing less than suppression of the freedom of speech. (Applause.)

These all-too-common practices are destructive of learning and the pursuit of knowledge. And they are wholly outside the American tradition. (Applause.)

As you, our youth, are the future, and universities, the bellwether of thought and culture, I would submit that the increasing intolerance and suppression of the time-honored tradition of free expression on our campuses jeopardizes the liberties of every American. This should not — and must not — be met with silence. (Applause.)

A little more than two years ago, I was here when this university, this nation, and the world, bid farewell to a giant of this institution and of the 20th Century, Father Theodore Hesburgh. (Applause.)

His contributions as the longest-serving president of this institution are legion. But his moral example is greater still and will impact generations.

And on this point of which I speak, he wrote words of admonition that I hope you will carry into the careers of consequence that unfold before you. He wrote: “Notre Dame can and must be a crossroads where all the vital intellectual currents of our time meet in dialogue, where the great issues are plumbed to their depths, where every sincere inquirer is welcomed and listened to, where differences of culture and religion and conviction can co-exist with friendship, civility, hospitality, respect and love.”

Father Ted said Notre Dame was to be, as she is today, “a place where the endless conversation is harbored and not foreclosed.”

And so I say to this rising generation: So, too, must America be in your time. (Applause.)

So as new graduates of this exceptional university, I urge you: Be leaders for the freedom of thought and expression. Carry the example and principles you’ve learned here to all the places where you will live and work.

From this day forward, like the generations who have gone before for the past 175 years, the graduates of the Class of 2017, you are called to lead for good, to be men and women of integrity and values, to be salt and light in these ever-changing times. And you’re called in one other way: to have faith.

For, as the Old Book says, He knows the plans he has for you — plans to prosper you and not to harm you, plans to give you a hope and a future.

Strive every day to lead for good with courage and conviction. Live your life according to the precepts and principles that you have learned and seen here at Notre Dame.

And in all that you do, have faith that He who brought you this far will never leave you, nor forsake you — because He never will. If you hold fast to Him, to the faith that you have deepened in this place, and to all that you have learned and the examples you’ve seen, I know you will not only persevere, you will prevail. And you will lead your families, your professions, and our country to unimaginable heights.

University of Notre Dame Class of 2017, this is your day. So go, Irish — the future is yours.

Thank you. God bless you and God bless the United States of America. (Applause.) 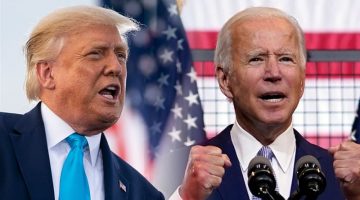