Indiana Governor Mike Pence tells Indy Politics a decision regarding any run for the White House will come after the 2015 Legislative Session.

The Governor made the comments today during his end of the year media interview. He says once session is over he and his family will make a decision about a White House.

Pence is frequently named as a White House contender in 2016 and helping fueling speculation is a story out of POLITICO that Pence ally, former Congressman David McIntosh, is taking over the conservative group Club for Growth.

You can hear Pence’s comments below, they run approximately 11 minutes.

He also discusses why he didn’t include making the Superintendent of Public Instruction an appointed position as part of his legislative agenda. As well as a possible budget tug of war with Indiana lawmakers over reversions; the practice of holding back budget funds that have already been appropriated. 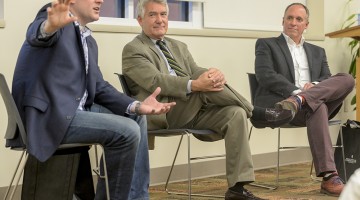