The Indiana Chamber has released a new study concluding school corporation size has a direct impact on student achievement and more than half of Indiana school corporations are too small to produce the most effective outcomes.

The research was by the Ball State University Center for Business and Economic Research (CBER).

Chamber officials cites numerous earlier studies, both nationally and by CBER, found that school corporations with fewer than 2,000 students are not able to operate at optimal efficiency to maximize resources going into the classroom.

In 2014, 154 of Indiana’s 289 school corporations had total enrollments of less than 2,000 students. Eighty-five of those corporations experienced enrollment declines of 100 or more students between 2006 and 2014.

Ball State researchers took into account demographic and socioeconomic factors. For example, the average SAT score of 949.5 in the smallest corporations (between 240 and 999 students) compares to a 989.8 average in corporations with between 2,000 and 2,999 students. Even when economic differences between corporations are factored in, that 40-point raw gap remains at more than 20.5 points.

AP course offerings are one indicator of preparation for higher education, with higher-level math and science courses often a pre-requisite for pursuing STEM (science, technology, engineering and mathematics) majors. Corporations with fewer than 1,000 students offered an average of 2.69 AP courses with enrollment of 8.53 students in 2015. That compares to 5.95 offerings and 22.26 students for corporations with between 2,000 and 2,999 students and even more courses and student participants in larger school districts.

The research also revealed that  “94% of Indiana’s small school corporations (fewer than 2,000 students) are contiguous with another small corporation.”

You can hear the news conference in the Leon-Tailored Audio above.  It is divided into two parts, the announcement and questions from the media. 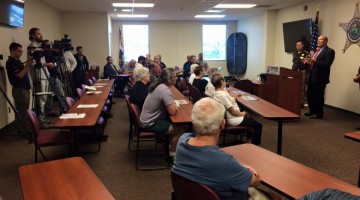