Stutzman made the announcement to nearly 200 supporters in Roanoke, just  southwest of Ft. Wayne.   He says wants to focus on economic growth, job creation and national security.

Stutzman ran for the Senate in 2010, he came in second in the primary after Dan Coats.   Coats announced earlier this Spring he was not running for re-election.  The only other announced candidate in the race is former Republican Party Chairman Eric Holcomb.

You can hear Stutzman’s announcement as well as his media availability in the Leon-Tailored Audio above.  The announcement is 20 minutes, the news conference runs about 8 minutes. 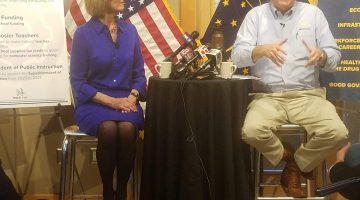