Although sources tell Indy Politics that Governor Mike Pence is a top contender to be presumptive Republican Presidential nominee Donald Trump’s running mate, the Governor avoided saying whether he would take the job if offered.

Pence and First Lady Karen Pence  and his daughter spent part of the weekend with Trump and his family.   The Governor is being vetted as  a possible contender for Vice-President.

Pence the purpose of the visit was for the two families to get to know each other better.  He says Trump was gracious, but he reiterated a spokesman’s earlier statement that nothing was offered nor was anything accepted.   And  the Governor carefully avoided answering whether he would take the VP spot if offered.

If Pence were to accept the job, he would have to resign from the ballot by mid-July in order for Republicans to replace him.

You can hear the Pence’s  in the Leon-Tailored Audio above.  It runs about 8 minutes.

Trump will be in Indianapolis on July 12 for a high dollar fundraiser. 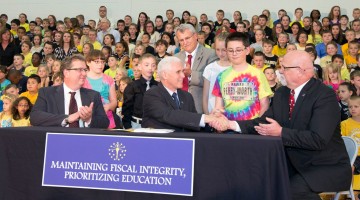 Some Good Budget News, For a Change