WIBC: No Charges Filed Against Hill

WIBC news is reporting a special prosecutor says he will not file charges against Indiana Attorney General Curtis Hill after he had been accused of inappropriately touching four women in a bar in Indianapolis last March.

Dan Sigler, who had been named the special prosecutor to investigate the claims, said during a news conference Tuesday morning that he could not prove that Hill had forced himself upon the four women to qualify for the Sexual Battery charge.  Siegler also said he was not charging Hill with Simple Battery because he could not prove that Hill acted in a “rude or insolent manner” in his behavior.

At the press conference, Sigler said investigators questioned 56 people who claimed to be witnesses to the incident.

Hill has denied any wrongdoing.

The women who accused Hill of inappropriate behavior say they may file a civil lawsuit against Hill.

A copy of the Inspector General’s report can be found here.

The Special Prosecutor’s investigation exonerates and absolves Mr. Curtis Hill of any factual and legal criminal behavior.  Mr. Hill appreciates the diligence and thoroughness taken by Special Prosecutor Daniel J. Sigler in his investigation of his conduct on March 15, 2018, at Sine Die Party held at A.J.’s Lounge in Indianapolis, Indiana.  We never doubted that Mr. Hill would be cleared of any alleged crimes.  Special Prosecutor Sigler was charged with leading the investigation of the allegations and in doing so he worked closely with the Indiana Inspector General’s Office as well as the Indianapolis Metropolitan Police Department.  Mr. Hill will continue to serve the people of Indiana in the capacity for which he was elected as the Indiana Attorney General.

“I believe the women and believe Governor Holcomb’s statement in July, that there was ‘no other option’ but for Attorney General Hill to resign, is as appropriate today as it was then. Elected officials must be held to a higher standard and Hill’s actions are disqualifying at any level, let alone as the state’s top law enforcement officer. I am hopeful Governor Holcomb will echo his words from July and reaffirm his call for Hill to step aside. Any other action from the governor will serve to underscore a brewing culture of cronyism and corruption at the Statehouse.” 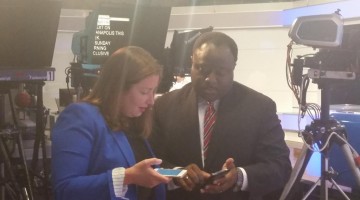