The chairmen of the Indiana Republican and Democratic parties go head to head on the big issues facing Hoosiers.

The forum was moderated by Brandon Smith of Indiana Public Media.

You can hear the discussion in the Leon-Tailored Audio above.  Part one is the “debate”, part two is questions from the audience.

It was part of the official release of the 2017 Ball State/Old National Bank Annual Hoosier Survey. 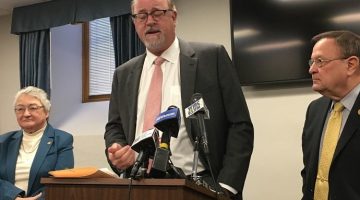