The Marion County Sheriff’s Department is getting audited.

This comes as the Indianapolis City-County Council passes a $1.13 billion budget.

During the budget process numerous Councilors expressed concerns about Sheriff John Layton’s decision to close down the Arrestee Processing Center and transfer all operations to the City-County Building.  In addition, the Sheriff is planning to stop running jail wagons and protecting offenders who are taken to Eskenazi Hospital on January 1.

With IMPD getting ready to assume some of the Sheriff’s responsibilities, City spokeswoman Taylor Schaffer released the following statement regarding the audit.

“In order to provide the City-County the information they need to make an informed judgment on the planned transfer of some public safety functions from the Sheriff’s Office to IMPD, the mayor’s office was is working with the sheriff’s office to initiate a full analysis and third-party audit.”

The Sheriff’s office says it welcomes the audit and blames it’s financial problems, in part, on the transfer of  IMPD back to the city when Greg Ballard became Mayor and health care costs at the jail.

“Over the past few months, as the City-County Council has considered the 2018 budget, the topic of arrestee services—including transport, medical security and identification of arrestees— has been widely discussed.  As a result of these meetings and discussions, questions have been raised about the funding of the Marion County Sheriff’s Office.   For the record, Marion County is the only county where the Sheriff provides “Arrestee Services”.  These services are not required by law, resulting from the creation of IMPD and the transfer of control to Mayor Ballard.  Unfortunately, unlike every other county in the state, in Marion County, the decision to arrest someone who needs medical care does not carry with it the responsibility to pay the medical bills or provide security while an arrestee is hospitalized.   In addition, transfer back of the arrestee transportation responsibilities has been discussed for years.  Prior to the creation of IMPD, each law enforcement agency in the county transported its own arrestees.  No funding came to the MCSO with this responsibility.  With the closure of court operations at the APC, it was a good time to address these chronic issues and seek to take advantage of potential savings which will result in the transfer of arrestee responsibilities.  The Sheriff’s Office is working jointly with the Mayor’s Office on these issues to find a solution—and believe that an audit by an independent third-party accounting firm will help us collectively—the Sheriff’s Office, the Council and the Mayor’s Office—determine the appropriate funding level for the MCSO.The Sheriff’s Office welcomes and encourages such an audit.”

The last time the Sheriff’s office was audited was in 2014,  The city Office of Audit & Performance found inconsistencies in the agency’s payroll structure.  It said it could not determine the “validity, accuracy and timeliness” of employee pay and benefits.  It also noted an “internal control weakness” when it came to comparing compensatory time balances as well how the Sheriff’s department calculated the difference for hours worked and time off.

Although the Council approved the sheriff’s budget Monday night as is, President Maggie Lewis made it clear the city would get back any money it spent from the Sheriff once the audit was completed.

You can hear Lewis, as well as Republican leader Mike McQuillen in the Leon-Tailored Audio above, as well as Hogsett chief of staff Thomas Cook who describes the audit process to Councilors. 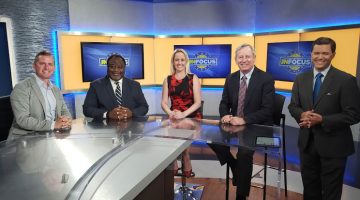