More Murder by the Numbers

The most likely murder victim in Indianapolis this year is a black male, age 31 on the northeast side.  He will also be more likely killed on Sunday morning after midnight by a gunshot

That’s according to data compiled by IMPD for all the criminal homicides since January 1.

So far this year, the city of Indianapolis is averaging a murder every 2.3 days and is on track for a second record year of murders..

Of the 147 murder victims, local adult criminal histories were found for 88 (60%) of the victims. These 38 individuals accounted for 386 adult felony arrests.   That number was 66% in June.

Of the 75 suspects where a name was known, prior local adult criminal histories were found for 41 (55%) of the suspects.  These 41 people accounted for 174 adult felony arrests:

There have been nine juvenile murder victims so far this year and eight suspects under the age of 18. One of the suspects was involved in a triple murder.

Ten (7%) of the 147 murders were known to have been motivated by drugs.

Blacks are about 25% of Indy’s population and have been 66% of the murder victims, down from 72% earlier this year.

In addition, the data also showed

The city and IMPD  announced Monday a new effort to engage the community and add more police beats to mitigate the rising tide in 2018. 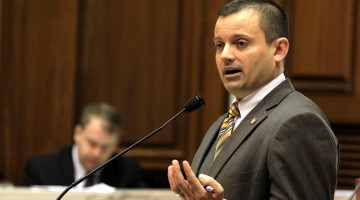